Chris has been making games since 1997. He cofounded GCS in 2004, organizing the club's first several semesters. After graduation, Chris worked as a Technical Game Designer at Electronic Arts on Medal of Honor Airborne and Boom Blox, as an early hire at a Silicon Valley start-up (began by fellow GCS cofounder/alum, Curt Bererton), and co-developed iOS games with another GCS alum (John Nesky) both independently and through publisher arrangements. Chris attended graduate school at Georgia Tech in 2010. While at GT, he started a similar club, VGDev. In 2014, Chris left the PhD track to focus full-time on teaching independently online, including operating a worldwide adaptation of the pattern learned in these clubs, HomeTeam GameDev (formerly called Gamkedo Club). Outside of his main business, he's also helped curate IndieCade's speakers for 5 events, and is now leading the creation of an IndieCade alumni network. Chris serves on the board for the Los Angeles chapter of IGDA. 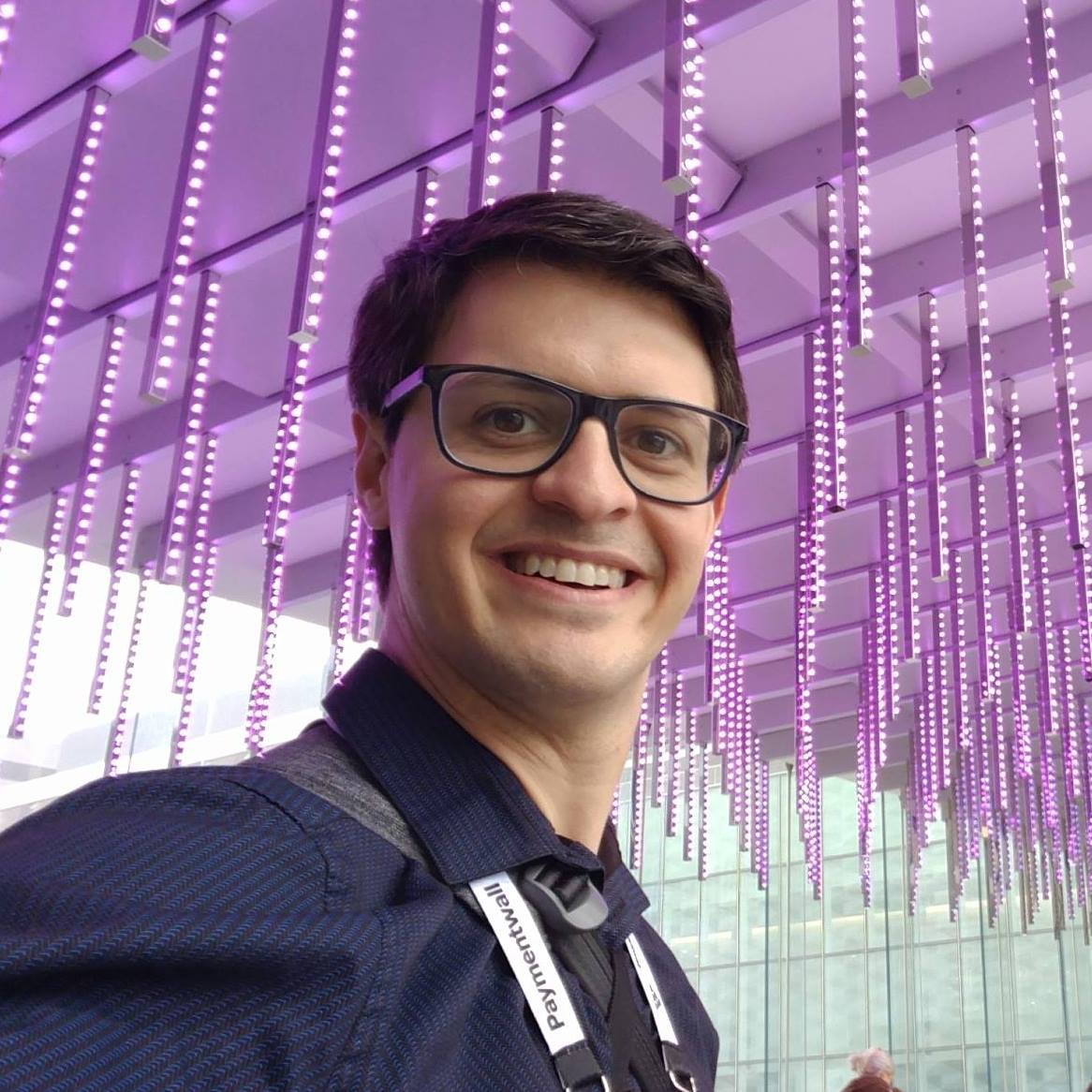 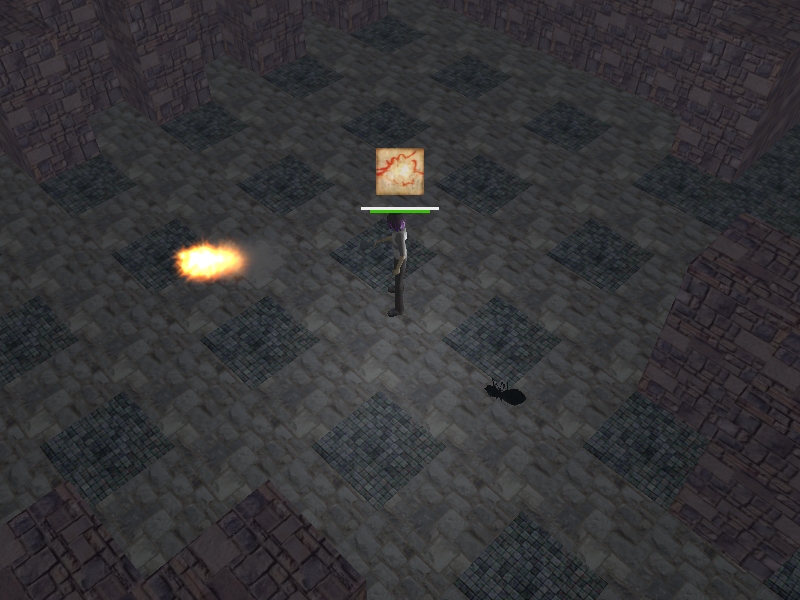 3-D Action RPG. Arbarlith is back, and more action-packed. This time, the focus is on instant gratification, hack-n-slash game play that is easy to pick up and play. 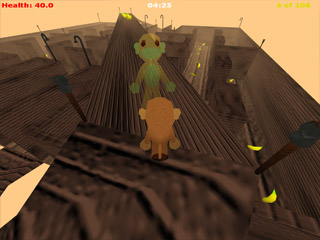 3D platforming at its finest! Power Monkey's 7-year old boy has left for the evening for a sleepover, and now he must protect the boy's room at all costs and find all of the missing bananas! In this 3rd/1st-person adventure game, you must collect all of the bananas by exploring the room into the jungles of the closet all of the way to the depths beneath the bed, and all this before the boy returns! Good luck, Power Monkey, and don't let the bed bugs bite! 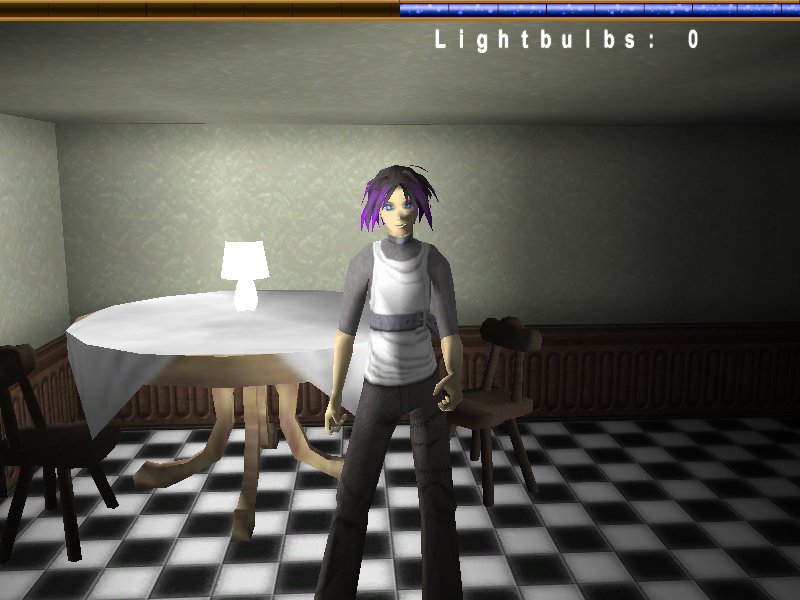 A frighteningly good time! Art and ambiance-heavy survival horror that follows the main character, Theryn Hashimoto, through his fantastic and horrifying dream... or is it a reality? Theryn himself cannot distinguish the line, so he must follow his parasomnia into the depths of his own psychological darkness to find the answer. 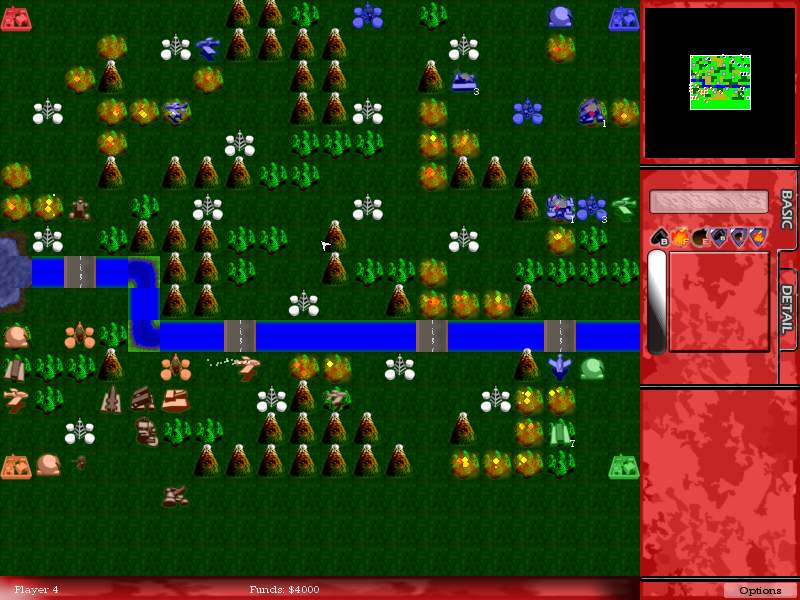 Multiplayer Turn-Based Strategy. Create units, capture buildings, and attack the enemy in an attempt to conquer the map. The three armies have their own strengths, weaknesses, and special units: Crimson is powerful. Cobalt is crafty. Pine is numerous. It's up to you to decide who wins. You can play multiplayer (hotseat or over a network) or on your own against the AI, and maps can be created and edited with a built-in map editor. 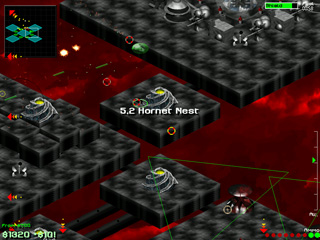 Isometric space-age bombing game. Taking place in 3305 A.D, Eternal Storm dives into the rich clouds of Jupiter, where the Juno Corporation uses automated mining platforms to maintain a monopoly on the collection of Hydrogen-3 fuel. Inside the Great Red Spot of Jupiter, a monstrous storm three times the size of Earth, Juno is rumored to have found the storm's source. Hidden by the fury of this storm, a few brave pilots launch a rebellion -- the Jupiter Liberation Front -- seeking to strike Juno in its heart to uncover the source of its secrets. 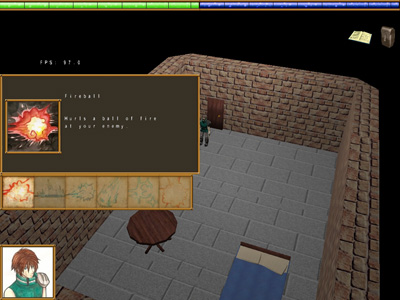 Dungeon crawling hack-n-slash. Beasts from the Aether are starting to break through the barriers surrounding the magical world of Arbarlith, unleashing chaos. Descend into the dungeons and push them back into the abyss they came from! 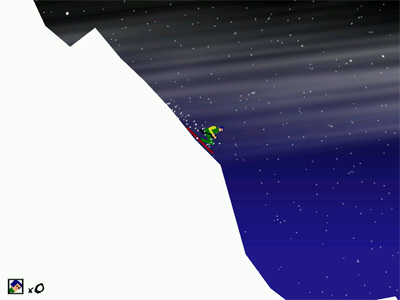 Ski down the mountain before the yeti catches you! Brad and Roxy are tabloid photographers convinced of the existence of a race of yetis. Unfortunately, the flash of their camera wakes them up in their native habitats in high mountains, and it's a race to the finish before they become lunch. There's nothing more challenging than out-skiing a yeti on a hover board. 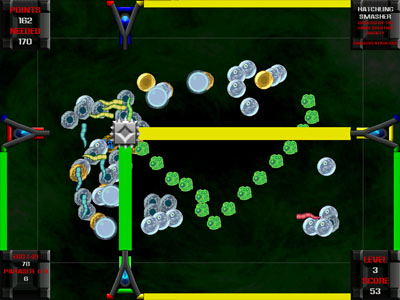 Save the patient by smashing all the parasite eggs, classic arcade style! Hatching Smasher is all about frenzied alien larvae destruction in true pick-up-and-play fashion. Navigate the puck to break eggs before they hatch, but watch out - you need to clean up any parasites that hatch before they escape. What's worse, some of the aliens are evolving, making them large and aggressive game bosses! And of course, no arcade game is complete without powerups tied to each section of the game. 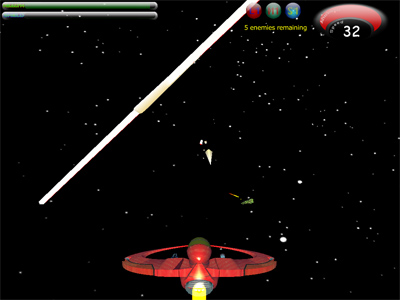 3D space shooting, barrel rolls included. Laser guns, power ups, hordes of enemy space ships, mission objectives, and barrel rolls, topped off with some of the craziest voice acting to ever grace deep space all make the Hegira experience a memorable one. 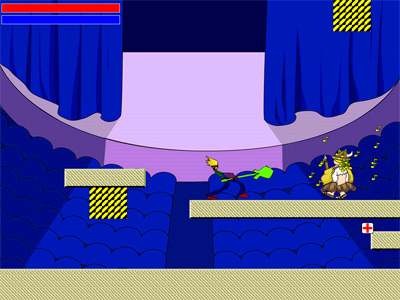 A rocking good time Can you feel the music? Good. Now try it upside down. 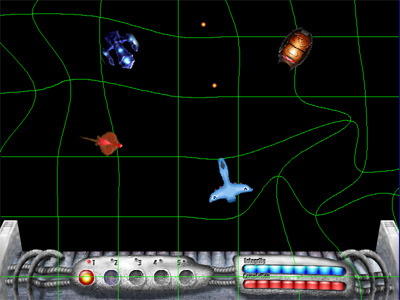 The most disorientating game of asteroids you'll ever play Imagine playing Asteroids... but instead of space rocks, you're battling aggravated intelligent life. And the fight is taking place in unstable, highly distorted space-time. Whoa. 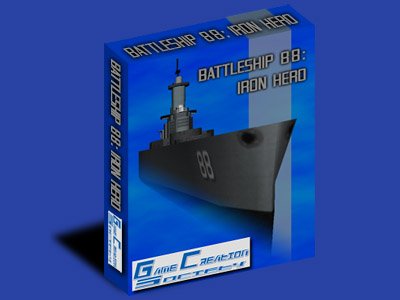 Command Battleship 88 to victory! It's World War II, and every encounter is to kill or be killed. As captain of Battleship 88, you know that the entire crew is well trained and prepared for battle. Expertly conducted, your crew - and thus your ship - can operate as an extension of your body and mind. Only by thinking on your feet, knowing your enemy, and capitalizing on your every opportunity can Battleship 88 make it safely back home to America. Your men are counting on you. Musical score provided by www.bangbangzoom.net. Special thanks to Angelo Mottola, Javier Gonzalez, Oscar Giner, Shawn Hargreaves, and Vincent Penquerc'h 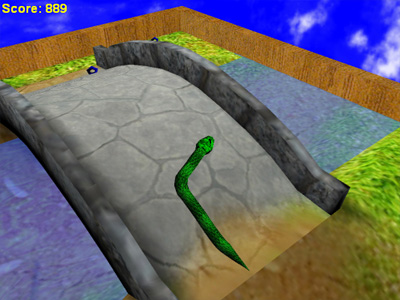 Snaaake! Snaaakee! Oooh its a snake! QBasic aficionados look no further, it's a new Nibbles for a new generation. During this transition to the third dimension, our snakey hero gains new powers of jump and tunnel to defend himself against all sorts of z-axial dangers.

CRC_Fatal_Error Shotgun Debugger is a 2D, top-down action game. It is The Future, and your habit of computer network exploration has finally done you in. You are captured and taken to a strange underground complex populated by robot soldiers. Your task is to escape the facility -- but the hordes of walking death machines aren't just gonna let you. 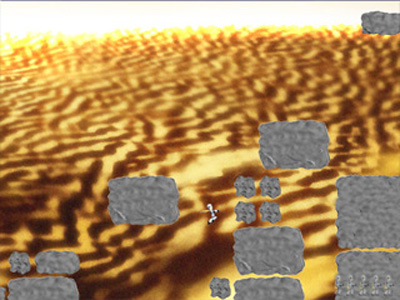 Jump to the beat to avoid crushing defeat! The sky is falling! But that's no problem if you're Syntek. With rocket power behind every one of his jumps, he can stylishly avoid all the falling debris and make his way to the top... literally. 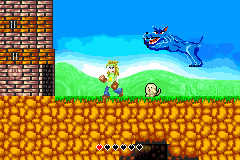 Multi-Dimensional GBA Adventure Platformer Grace's First Adventure is a GBA game where you must explore trees and caverns as you search for the five lost dogs and bring them back to the brick house on the surface, combatting various animals along the way. Note that the dogs can be used as a weapon! ;) Controls: D-Pad: left & right, and down switches between foreground and background A: Jump B: Grab/Throw Start: Exits title screen 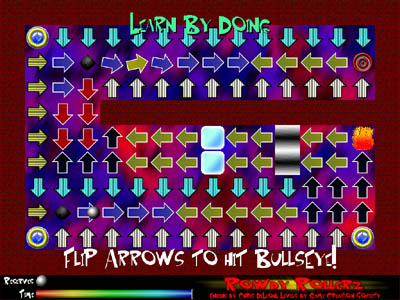 Rollz your way to victory! Rowdy Rollerz isn't like other puzzle games you've played - there are no falling blocks, no matching shapes, and no sticky bubbles. Rowdy Rollerz is a game where you control the world itself, and have to handle that omni-potent control to steer a ball from its source to its target. 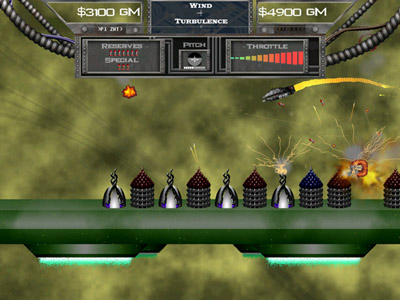 Welcome to the corporation, employee! Saturn Storm is a one- and two-player 'bombing run' game. You control a bomb-laden drone through Saturn's harsh atmosphere and attack floating mining platforms belonging to rival corporations. Between runs, you earn money, which can be spent on a variety of bombs, including bunker busters, EMP bombs, and many others. 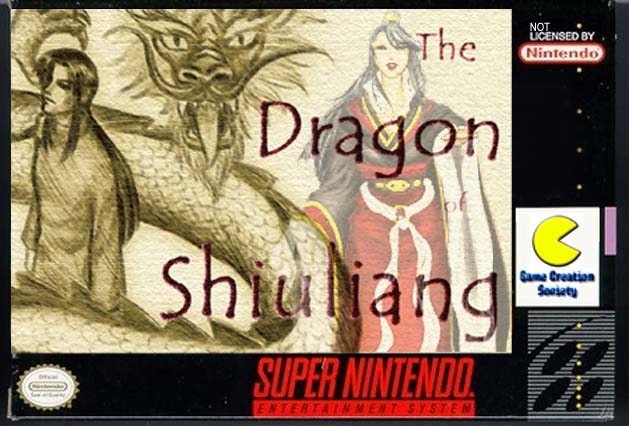 First GCS game ever! The Dragon of Shiuliang has met its original goal of recreating the spirit of Dragon Warrior. Featuring many separate regions to explore, 50 NPCs, original music, art, and dialog, world persistence, and scripted cinema sequences, DoS has shaped up into a finished and complete RPG in its own right. It's written in C++ using the Allegro library, and the entire source is included in the download. Included binaries are compiled for IBM/Windows PCs. Read the readme.txt for further details.